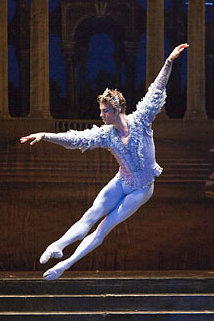 I like to try to catch Boston Ballet at least a couple of times a season, and after reading a great review in the New York Times I decided to check out their production of The Sleeping Beauty last night. Alastair Macaulay’s reviews have proven to be extremely reliable, which has led me to do a bit of reading about him. He was appointed The New York Times’ chief dance critic a bit over two years ago, and at the time there was some controversy over the fact he was British and not American, let alone from New York. This blog post from that time gives an overview of the reactions and this interview with Macaulay from the same time period takes the form of a mild rebuttal as well as a more-than-convincing laundry list of his credentials. It is rare that I encounter a critic who shows such good taste, breeding, and intelligence as to so completely align his opinions with mine, so I’m looking forward to reading more of his reviews in the future. 😉

Macaulay does a great job of setting the production in an historical context. Like Macaulay I was struck by the precision but also the character of the corps de ballet’s dancing. I also agreed that the Aurora I saw, Larissa Ponomarenko, danced extremely well, but she seemed to lack any real tenderness. He also praises James Whiteside as the Bluebird (why do I keep wanting to write “Bluebeard”?? Ha ha.) and Kathleen Breen Combes as his partner Princess Florine, whose dancing I also found to be highlights of the production, along with all three members of the Pas De Trois (Jared Redick, Megan Gray, and Heather Myers). Mindaugus Bauzys was a suitably dashing Prince Florimund, although I’m not sure if he’s still a principal dancer of the company or if he was brought in to help cover for the injured Prince from last week. Misa Kuranaga was the Aurora who he favored, and I was sorry not to see her in that role after seeing her sparkling and flitting (and all too fleet) performance as the Songbird Fairy.

The sets, by the late David Walker, also deserve special mention for perfectly setting the stage. I also agree that the sound system at the Wang is far from ideal: it tends to mute the brass and bring out a raspy quality in the strings. And I too found Jonathan McPhee’s conducting, while precise and focused, to be much more functional than characterful. I’ve noticed it before in general and at the Boston Ballet in particular, but I’ve come to expect orchestral dance conducting to be rather wooden more often than not, given the constraints of having to keep to a completely regular tempo.

Karen Campbell’s review for The Globe praises McPhee’s conducting, and does mention that the score provides opportunities for the soloists of the orchestra to shine, all of whom excelled. She found Larissa Ponomarenko’s Aurora to be “a marvel”, and also praised Whiteside and Combes’ performance of the Bluebird pas de deux. In the role of the Lilac Fairy she thought “[Erica Cornejo’s] presence seemed a little lightweight for a character of her power and import”, although I disagreed with her there and found Cornejo to be a compelling performer.

The production ends tomorrow, so see it while you can. Additional reviews can be found on BB’s press page here.

Even though I was feeling a little balleted out yesterday, I think I still want to see their last production of the season, Diaghilev’s Ballets Russes Centennial Celebration which looks like it’ll be a great collection of classics plus a new work by Resident Choreographer Jorma Elo. Goldstar has half-price tix for the final performance. W00t.

This entry was posted in Boston, dance, local, reviews. Bookmark the permalink.

2 responses to “Boston Ballet’s The Sleeping Beauty and a look at The New York Times’ chief dance critic, Alastair Macaulay”