A lifelong dream realized: A trip to the Cape Cod Chip Factory

A couple of months ago I fulfilled one of my lifelong dreams: to visit the Cape Cod Chip Factory. I’ve been a fan of the chips ever since I first came to Boston (although I was heartbroken when they substituted their spicy barbeque flavor for a milder one), and I’d been intrigued by the promise of factory tours printed on the back of every bag. Although I’ve been to the Cape several times I’d never managed to fit the tour in, partly I suppose because they only run them during normal business hours (i.e. M-F 9 a.m. to 5 p.m.), closed on weekends and holidays. But I finally made it, and now my life is complete. 😉

Alas, poor reader, they don’t allow pictures of the factory itself. The pictures above are from the parking lot which has signs every few feet to lead potato chip pilgrims to the entrance. The tour is self-guided and pretty minimal: just a handful of signs with diagrams and explanations in front of the glassed-off area where the machinery is working. There are also various letters and photos framed from fans. It would take you a minimum of five minutes to get through it all, and even if you’re a chip aficionado like myself and want to soak in the atmosphere you’d be hard-pressed to stretch the tour out to much beyond 15 minutes. So it’s not really worth a special trip for the general tourist, although it’s certainly easy to get there on the way to/from the rest of the Cape.

You’ll also be able to milk a few more minutes out of the experience by perusing the gift shop (which we were allowed to take pictures of). Apparently the company runs an annual competition for local schools where the kids make dinosaurs out of chips: 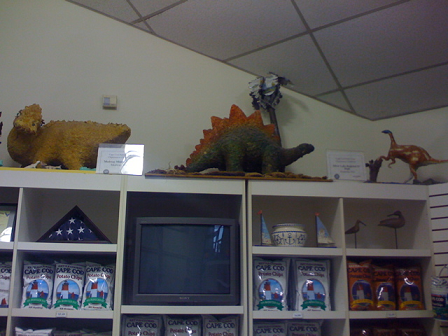 Alsome. Anyway, if you’re looking for more info, check out their website. Also, I was somewhat surprised to find out they’re doing popcorn now as well. I bought a bag and quite enjoyed it, but I haven’t found anywhere nearby that carries them (if anyone has encountered them, please let me know!), although the Harvest Co-op in Central Square carries a wide selection of their chips. Mmmmmm. Time to go to the grocery store. 😉

I keep intending to write some slightly more off-the-beaten track Boston-related arts posts (as that was one of the blog’s original intentions), but I keep getting sidetracked. But here’s a quickie.

An architect friend of mine was working on an entirely new house (hers, actually), on the Cape, where she grew up. A and I got to see it in its almost final state a few weeks ago and were thoroughly amazed. I haven’t been to the Cape enough times to have the look of the architecture really soak in much, but our friend used the classic Cape Cod architecture as a starting point, and one of the references she used was a book called The Cape Cod Cottage by William Morgan. I flipped through her copy and then picked it up from the library to look into it in greater depth.

In the accompanying essay to the slim book (96 pages, published by the Princeton Architectural Press in 2006) Morgan begins by stating (and I paraphrase) “a child’s first drawing of a house is essentially a Cape Cod Cottage”, basically: a triangular roof on a rectangle with a door in the middle, windows on both sides, and a chimney on top, also in the middle, with some homey smoke coming out for good measure. He explains that the colonists’ original design was born out of function, as a smaller house was more suited to the cold and windy conditions of the Cape and the central chimney helped heat the rooms. He gives a broad overview of the house’s evolution, including its takeover of America where Capes were mass manufactured and built all over the country, as well as its revival in more recent years. He mentions some of the endless variations (e.g. Greek columns, porches, gables, garages), although it’s clear he prefers the Cape in its purest form. Similarly in the book’s photographs he includes a generally chronological sampling of Cape Cod houses, most from the New England area, including a few from Middle America to illustrate the popularization and variations of the form; there are some historic photographs included as well.

There are only a couple of interior shots, but the book is clearly intended to be more of an art book than a comprehensive study. The photography is quite excellent, and it certainly has whet my appetite for a more in-depth look. If you’re looking for more info Wikipedia’s article is pretty shabby, but About.com has a more extensive article as well as a small gallery. Lastly, this article at CapeLinks.com is also an interesting read. It’s certainly given me a greater appreciation for the architecture of the Cape, and the rest of the country as well.