[The preview for this review is here.]

Caught Actors’ Shakespeare Project’s production of The Merchant of Venice last week. Of the three ASP productions I’ve seen thus far this one was probably my least favorite. Upon reflection I think a fair amount of the problem may have been the space, which was significantly bigger than the Harvard Square location where I’d seen them before. The theater, in the basement of Midway Studios at Fort Point Channel, is interesting in and of itself, with a balcony and a small spiral staircase, but its size proved to be unwieldy. Although the direction made fairly good use of the mostly bare stage, the actors, particularly the younger ones, had a tendency to shout rather than project, and overplay their roles rather than focus on the text in the way I’d seen in their more intimate settings. Part of this I think is also due to the post-Baz Luhrmann tendency for actors to deliver Shakespeare in a college frat boy sort of way, relying far too much on broad physical gestures and CON-STANT STRES-SES ON EV-ERY SYL-LA-BLE.

As for the production itself, in general I agree with The Globe’s comment that “the scenes never quite connect” and that as a whole the production is “too disjointed to be effective”. (Although I disagree with Byrne’s comment that “the subplots featuring Portia’s suitors gambling for her hand in marriage and Shylock’s daughter, Jessica (Sarah Augusta), eloping with Lorenzo (Jason Bowen) feel less like romances and more like two more business transactions,” because I found that choice actually helped unify the production.) My main gripe is that despite each scene working fairly well, somehow the overall motivations and emotional connection to the drama get completely lost. Antonio and Bassanio’s friendship, upon which the conflict of the entire play is based, is far too understated, as is Shylock’s final bitter defeat in the climactic courtroom scene; and in this production the moment where Bassanio risks all to win Portia’s hand in marriage is completely devoid of tension. The subplot involving Portia and Nerissa fooling their husbands ends the play merrily enough, but again without much connection to the rest of the play.

Despite the overall lack of focus, there was more than enough to keep one’s attention and a fair number of interesting touches. I generally don’t like underscoring in plays, but there was some nice sound design, including the soft sound of coins clinking during some scenes. Jessica, Shylock’s daughter, was directed as very young which makes her betrayal seem convincingly naive, and Jeremiah Kissel has deservedly received unanimous praise for his portrayal of Shylock. Kissel’s seething, manic portrayal is both sympathetic and tragic, and his hatred and lust for vengeance are compellingly repellent. His scene with Tubal is certainly the most emotionally honest moment in the entire production. I was a bit disappointed in Sarah Newhouse as Portia, and to a lesser extent Marianna Bassham as her maid Nerissa: I’d seen them in a previous production, and they just didn’t seem to bring enough unique characterization to their roles here.

The group has archived a fair number of reviews of the production on their website, including The Phoenix’s and EDGE Boston’s. And if you’re looking for more info on the play and its historical context, Wikipedia, as usual, doesn’t disappoint.

So even though it’s not a home run, ASP still provides a worthy take on Shakespeare’s classic and some fine acting, particularly thanks to Kissel as Shylock. The production is playing through December 7, so you still have a few more days to catch it.

Tara Donovan at the ICA 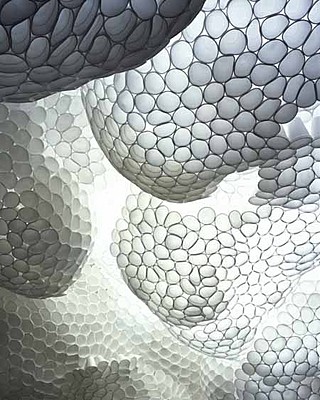 In only its second year in its expanded space the ICA seems to be doing a great job of putting together some compelling exhibits. Somehow they’ve already managed to lure A and me to see our third show this year. Even though it felt like we’d just been there to see the Anish Kapoor exhibit (which we enjoyed), we found ourselves back there to see the Tara Donovan exhibit, which opened in early October and runs through January 4.

We’d been intrigued by one of Dononvan’s works that we’d seen among those in the ICA’s permanent gallery, an imposing cube made more or less entirely of straight pins, so we were looking forward to seeing more. In a surprisingly on-target and gratifyingly artspeak-free description of her work the ICA’s website says:

For over a decade, American sculptor Tara Donovan has transformed huge volumes of everyday items into stunning works of phenomenal impact. Layered, piled, or clustered with an almost viral repetition, these products assume forms that both evoke natural systems and seem to defy the laws of nature.

To describe the works in detail would ruin the surprise somewhat and fail to do justice to works that (I hate to use the cliche, but) truly have to be “experienced”. But it should suffice to say that this was one of the most worthwhile modern art exhibits I’ve seen in a while. Part of that may be due to my own love of nature; Donovan successfully captures the same serenity and mathematical perfection, while at the same time combining them with additional layers of meaning due to her choice of medium, namely mass-produced everyday objects. Her work is incredibly accessible, a trait that usually immediately makes me suspicious and bored because it means dumbed down and belabored, but not in this case: this is a unique, worthwhile exhibit that I can whole-heartedly recommend to anyone. And apparently a lot of other people find her art worthwhile as well. Not that awards necessarily mean anything, but just two weeks before the show opened (her first museum survey ever, apparently), Donovan was named a 2008 recipient of the MacArthur “Genius” Grant.

Much as I enjoyed this and the previous exhibits we’ve seen, I’m hoping the ICA balances out these crowd-pleasers of large works by tackling some far less audience-friendly exhibits. Either way we’ll definitely be keeping our eye on what’s coming up next. Oh, and don’t forget that the ICA is free for all from 5 to 9 p.m. every Thursday night.

It doesn’t seem like there’s been much press on the exhibit, but the Globe had a little blurb about it a couple of weeks ago. The Globe also ran a little blurb mentioning that David Byrne visited the exhibit when he was in town for his performance at the Wang.

Unfortunately there are two new music concerts this coming Friday,
BMOP’s Concertos for Strings and Orchestra featuring five concertos, and BMV’s Credo in US concert, featuring American composers. Of the two it looks like we’ll probably end up at the BMOP concert, unless of course we get lazy.

Also coming up is the French shoegaze-y band M83 downstairs at the Middle East next Tuesday, November 18. Opening is a group called School of Seven Bells. Just started listening to them now, and they seem to be a similar vibe as M83. A bit too Stereolab-esque, but I’m liking what I’m hearing so far so I’ll probably check them out.

On my list of must-sees is the Actors’ Shakespeare Project’s production of The Merchant of Venice. The group is relatively new and constantly moves locations; according to the mission statement on their website: “Moving around the city from one exciting location to another will keep our productions interesting and will help us attract a wide variety of audiences.” They’ve found a success story in me, because I saw two productions they did in Harvard Square and both were very solid and enjoyable. So I’ll be following them to South Boston for this next production, which opened last night but which I haven’t seen any press on yet. The Globe ran a preview of the production which you can find here.

So that’s a bit of November figured out. Haven’t gotten anything set for December though, so I’ll have to start scouting around for something other than the usual bland holiday fare.